In Australia there is a train completely powered by solar energy

Byron Bay, Australia. It has been almost two years that tourists and residents have become accustomed to using what at first glance looks like an old train from 1949 but hides an unusual traction system for this transport system. The Byron Bay Railroad Company has in fact equipped this train to be powered completely by photovoltaic energy, an absolute novelty in the railway sector.

The train, which takes a journey of about 3km, connecting Byron Bay to the Elements resort, mounts a group of 77kWh batteries on board that allows you to travel the route from 12 to 15 times a day carrying up to 100 passengers seated. The battery system is sustained thanks to light and flexible solar panels mounted on the roof, capable of producing 6.5 kW of power and the entire traction apparatus is completed by a device, already seen in hybrid vehicles, which allows energy to be recovered during braking that can be spent to save 25% of that needed during acceleration.

To avoid disruptions on cloudy days, a 30kWp photovoltaic system was installed halfway along the route, allowing the train to remain powered at all times. Only in an emergency can the second diesel engine start operating. 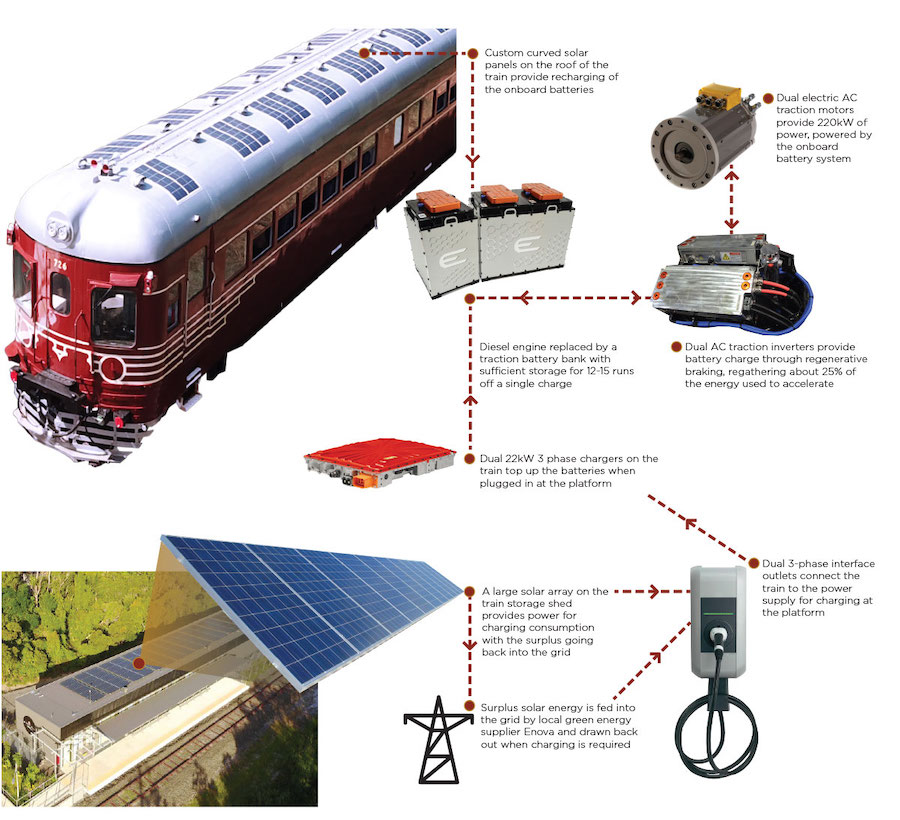 Although the entire complex is favored by its geographical position, which offers a completely flat terrain and a predominantly sunny climate, this train certainly represents a vanguard for future green systems, where trains can travel completely free from the use of polluting sources.

The first train completely powered by solar energy has been circulating in Australia for almost two years. The beginning of what could be a green alternative for rail transport